Visiting Paris - Sacré-Cœur and the Eiffel Tower - I Restore Stuff

Continuing our trip to Europe series (in between fun DIY furniture makeover posts, of course), I know a lot of you have been enjoying the pictures, places and the furniture or antique related things we got to see during our anniversary holiday.

If you missed the Surprise – Start HERE to see my reaction to Marty’s announcement “we’re leaving in 3 hours …”!

Part 3: The Antique Store we found on our way home from Versailles – OMG get me a shipping container now!

Part 4: Who knew there was so much FURNITURE at the Louvre?

After our trip to the Louvre on their only FREE entry Sunday of the month (BONUS), we headed towards Montmartre on a friend’s recommendation, to see if we could find some late lunch after purchasing these delectable looking eclairs we found at a posh patisserie, Pouchkine Café, on our way. 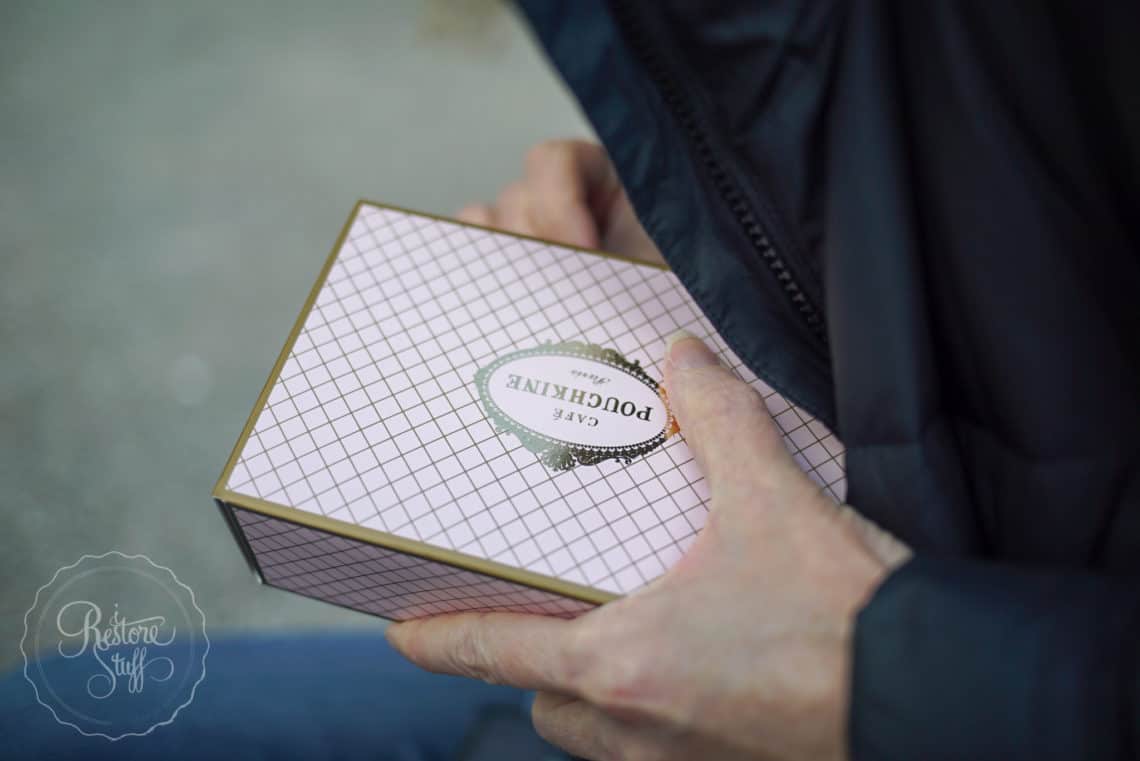 Yes, that is edible gold and silver leaf on the right of each eclair. 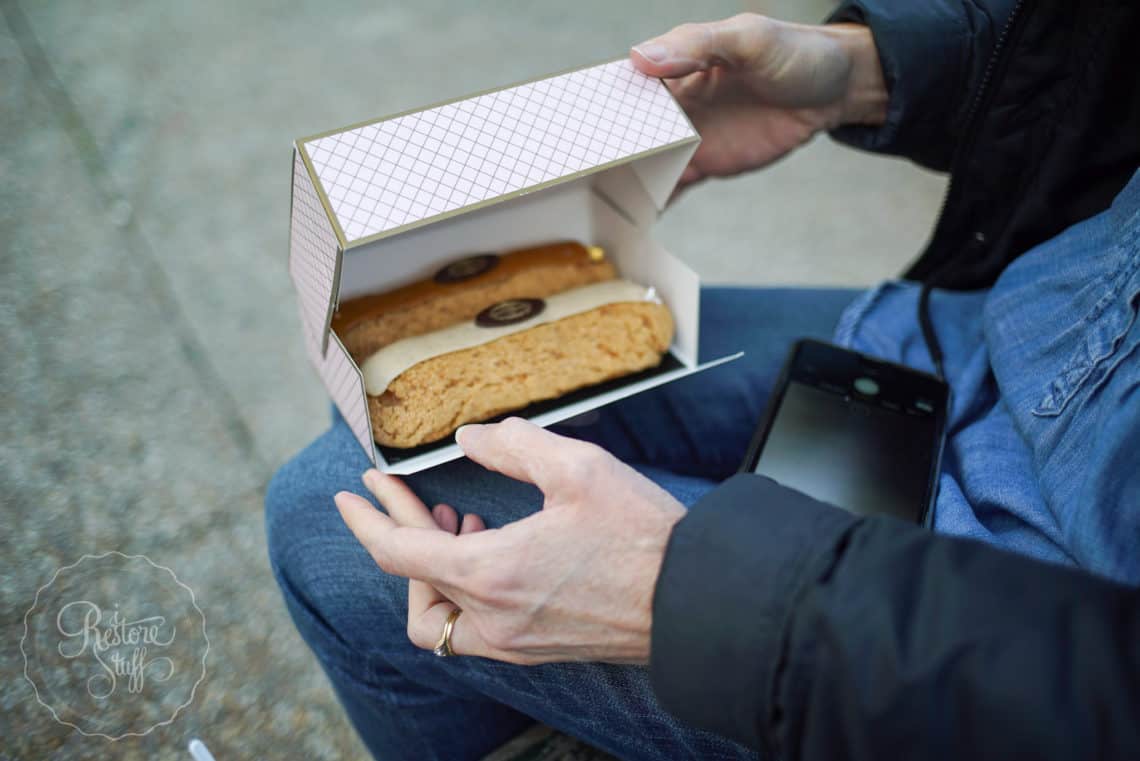 Sacré-Cœur basilica is apparently, France’s second most visited church after Notre-Dame cathedral. We had no idea about this place or what to expect – remember this trip was a surprise, and so “Little Miss Planner” here, didn’t get to research all the cool places to go. [Rolls eyes!] However, we did have a secret weapon – our son’s bestie and fellow house-mate had taken a trip to Europe, and was in fact, in Milan when we first arrived in Paris. More about the wonderful Joel a bit later … but suffice to say, he told us that Montmartre & the Sacré-Cœur was a great place to people watch, and a great place to visit during the afternoon through dusk to watch the sunset – and he was right!

Just on dusk, the lights coming on as we overlooked the city, was a beautiful site. You can see the people gathering in the pic above, even while it was still sunlight. But during our “people watching” and romantic sunset gazing, we witnessed a wedding party gathering on the steps to take photos, along with a proposal a few steps away from us – the guy got down on one knee, she said “yes” and the crowd around them cheered! A timely reminder of our 25 years together on this journey called marriage, of all the ups and downs, the happy times and the difficult times – all endured together, for better or for worse. This trip, was definitely on our highlights reel!

Daylight dawned and we were keen to see as much as we could on our final day in Paris, so we headed to the iconic Eiffel tower, and this is a pic from where the bus dropped us off at around 7:30am. 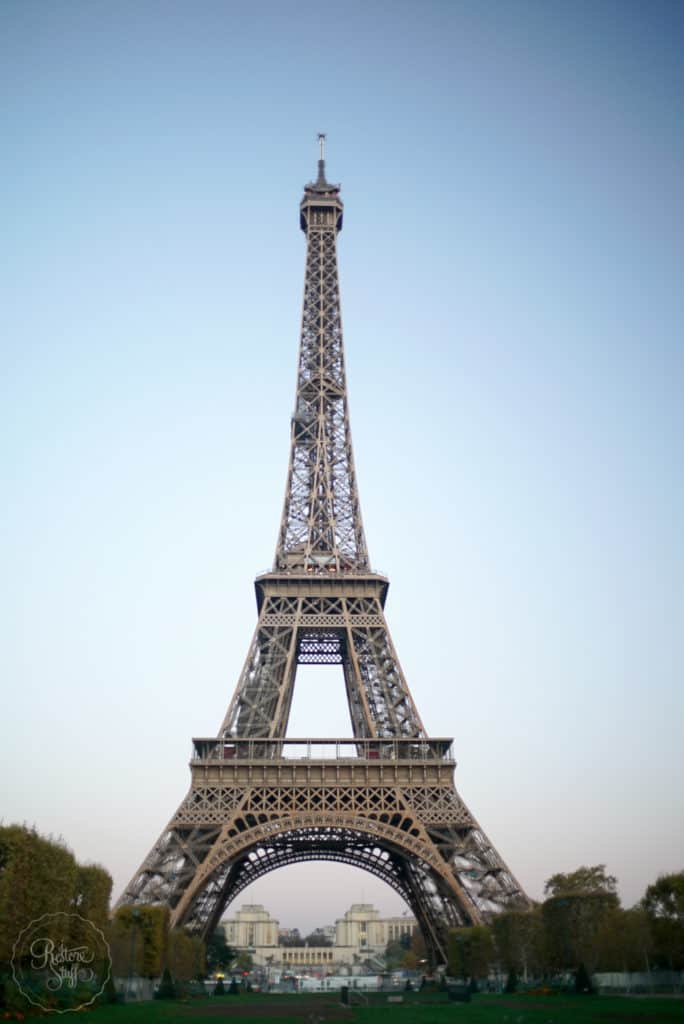 Still feels surreal that we were right there – this magical place that I’ve only heard stories about. We took a walk around the other side of the tower to see the sunrise and it really was beautiful! 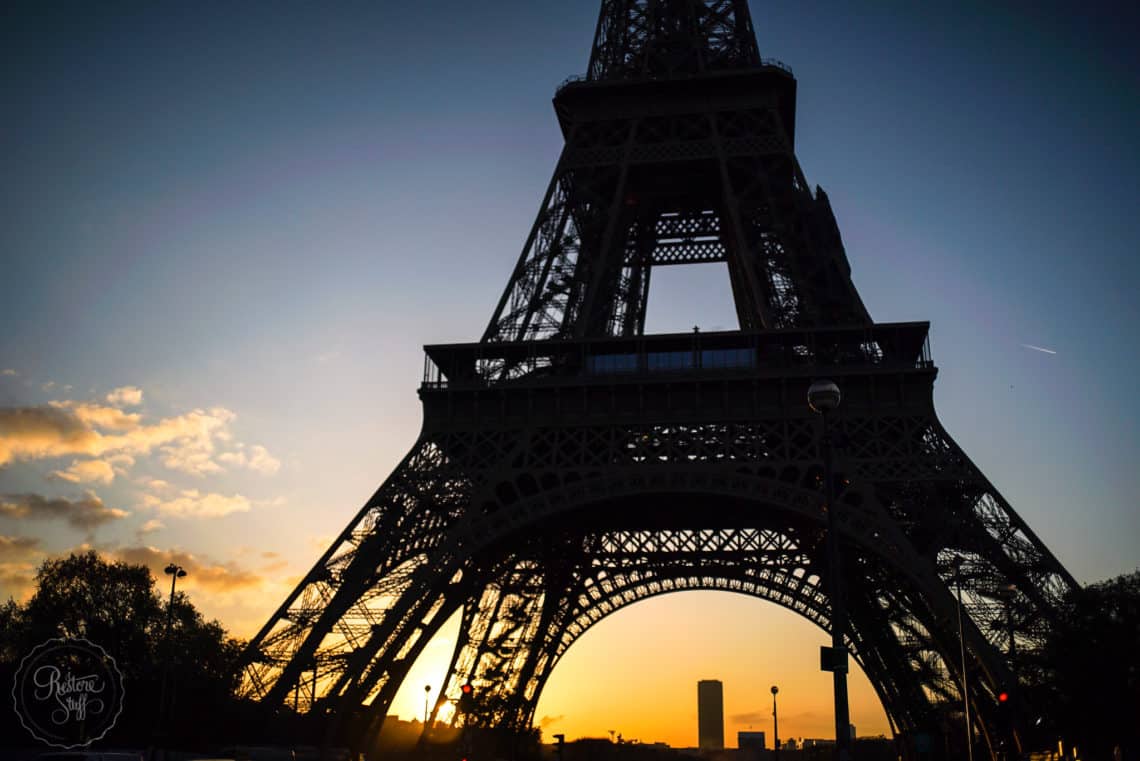 A tribute to our friend, Joel Young – a beautiful soul.

I need to pause this post right here – to dedicate this next little section, to our son Jordan’s amazing friend, Joel, whose earthly life tragically ended about 6 weeks after we met up with him for brekky at the Eiffel tower on this day. This has been a difficult post to write, but I’d love to give you a small glimpse into a truly beautiful soul, who left his amazing family and friends far too soon.

Before the Eiffel tower officially opened for the morning, we had agreed to meet up for breakfast with Joel, who, as I mentioned before, was visiting Europe at the time of our surprise anniversary getaway. He had just flown back to Paris from Milan, Italy the night before. We’d known Joel and his family since the boys early high school years, and since we knew Joel was in Europe, I sent him a FB message to ask him for his top tips for sight seeing in Paris. Remember, I like to plan – but this, being a surprise – there was NO plan. Now, maybe a lot of young adults in their early 20s might seem a bit awkward about contacting their best friend’s parents while in Europe on their 25th anniversary getaway, haha! But Joel had a gracious maturity about him, and that didn’t deter him in the least. In fact, he’d seen our Facebook posts, and when I sent out the “cry for help”, he replied, “Was literally about to send a list to you guys!” 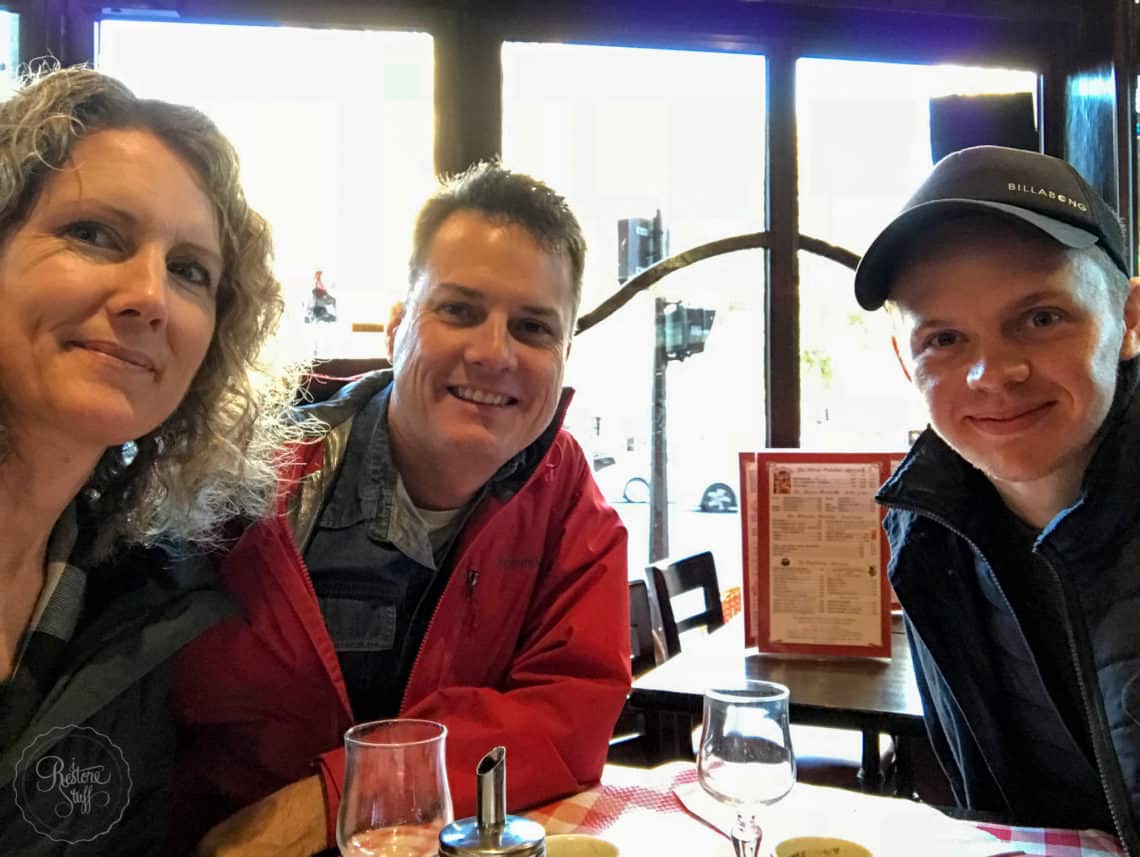 What a legend! For those who knew Joel, he was quite the foodie – but WAY more than a foodie. I’d say more like an entrepreneur chef, with big dreams to open his own cafe/restaurant one day. So of course his list for us, read more like a restaurant guide, with a few touristy things to see in between.

Copied and pasted from our Messenger convo, here’s Joel’s recommendations:

And so, our breakfast with Joel, brings back precious memories, and as he chatted about his time in Milan, Marty tried to plot how he could ask more about the city of Milan without actually “asking” about Milan – you see, as part of Marty’s surprise anniversary trip extravaganza, he had planned where we’d be going each day, but wouldn’t tell ME where we were going next, until the evening before. So at this stage, I had NO idea that he was planning on taking me to the top of the Eiffel tower, and announcing our next day’s destination … Milan, Italy. 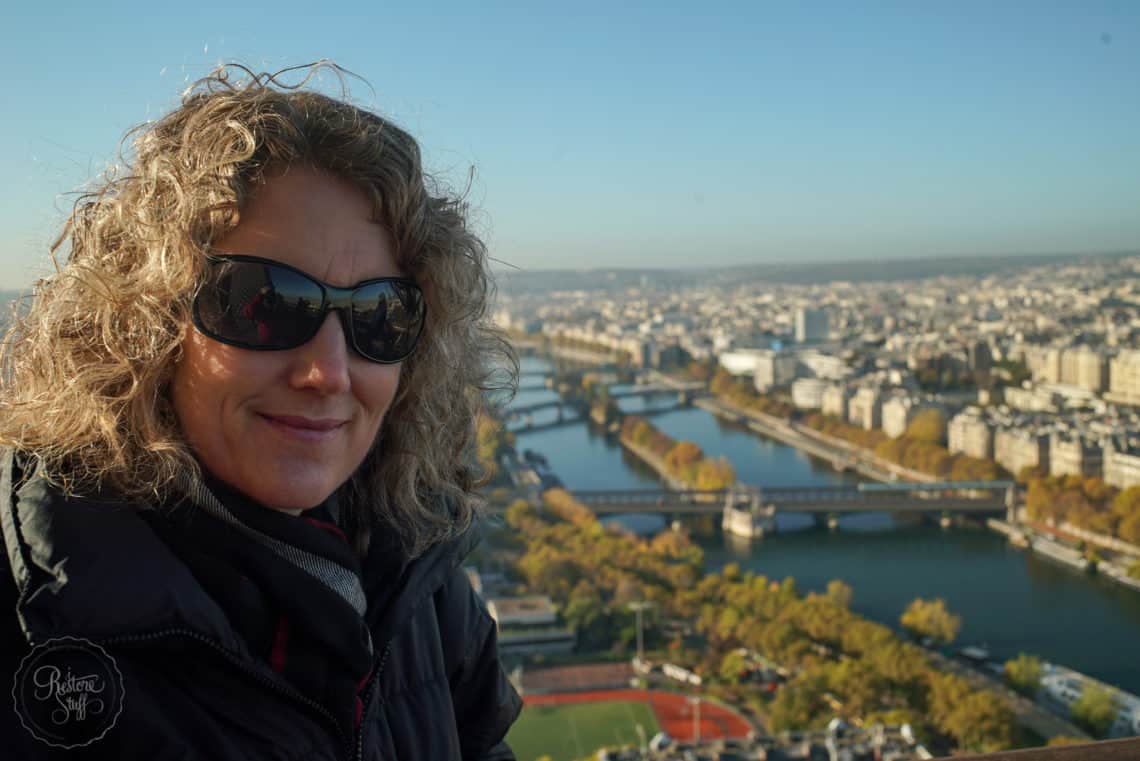 But before flying out of Paris, we still had the afternoon and night ahead of us, so we took the Hop on Hop off bus and saw Notré Dame and more. What an amazing building with incredible architecture. 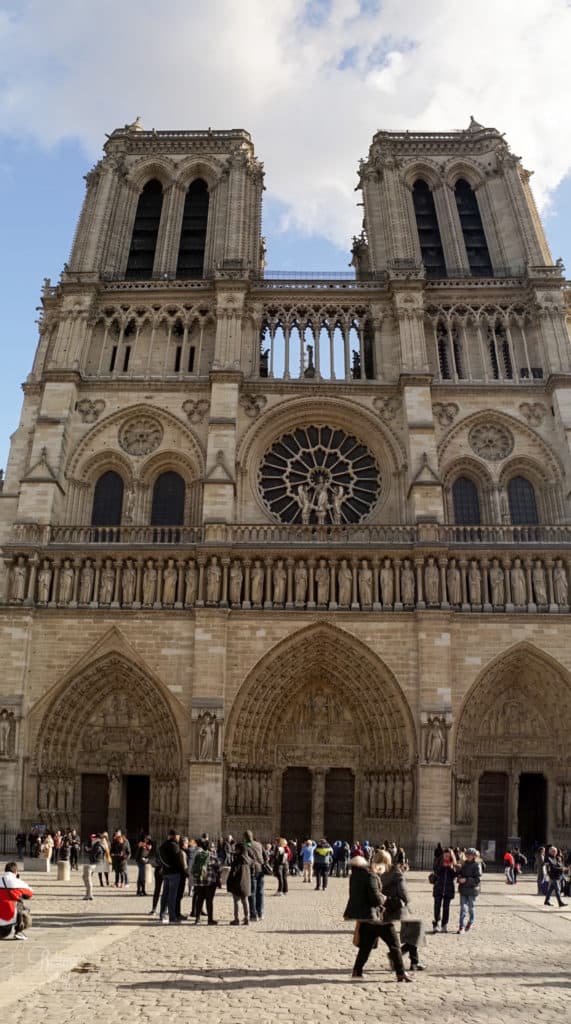 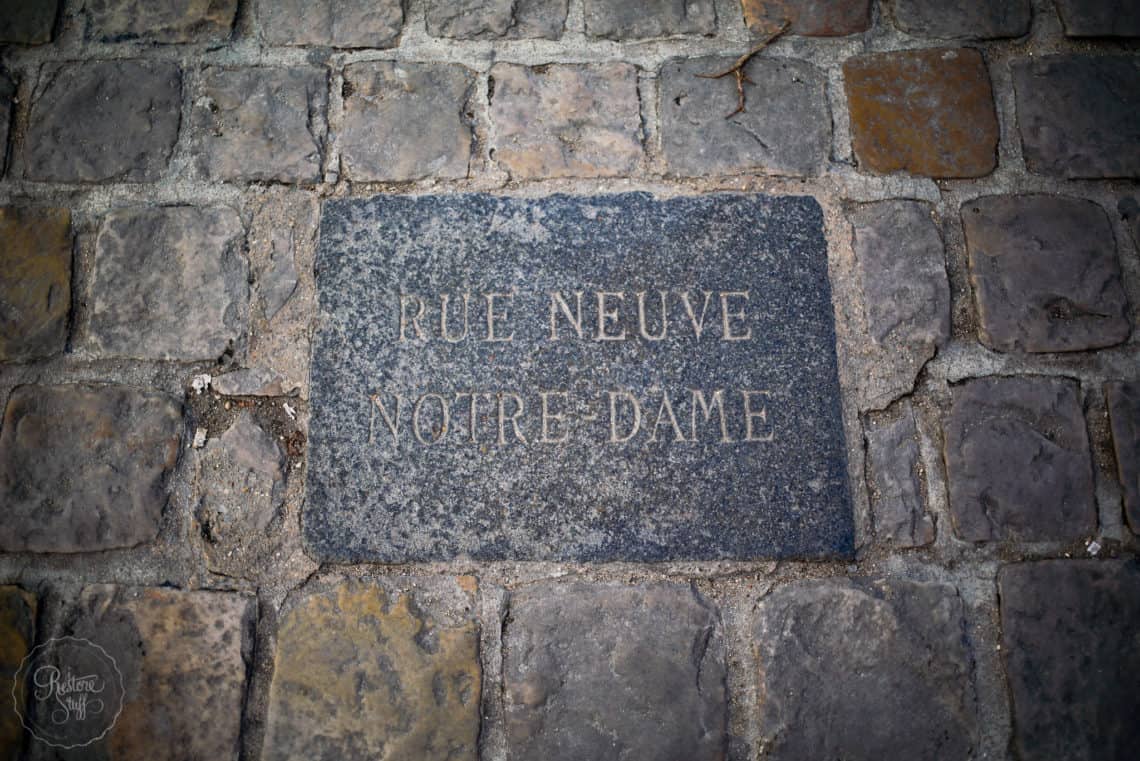 We took the Bell Tower tour (about 1/2 hour wait) and so glad we did. We sure got our exercise for the day with all those steps!! But what an incredible view of Paris from the towers. 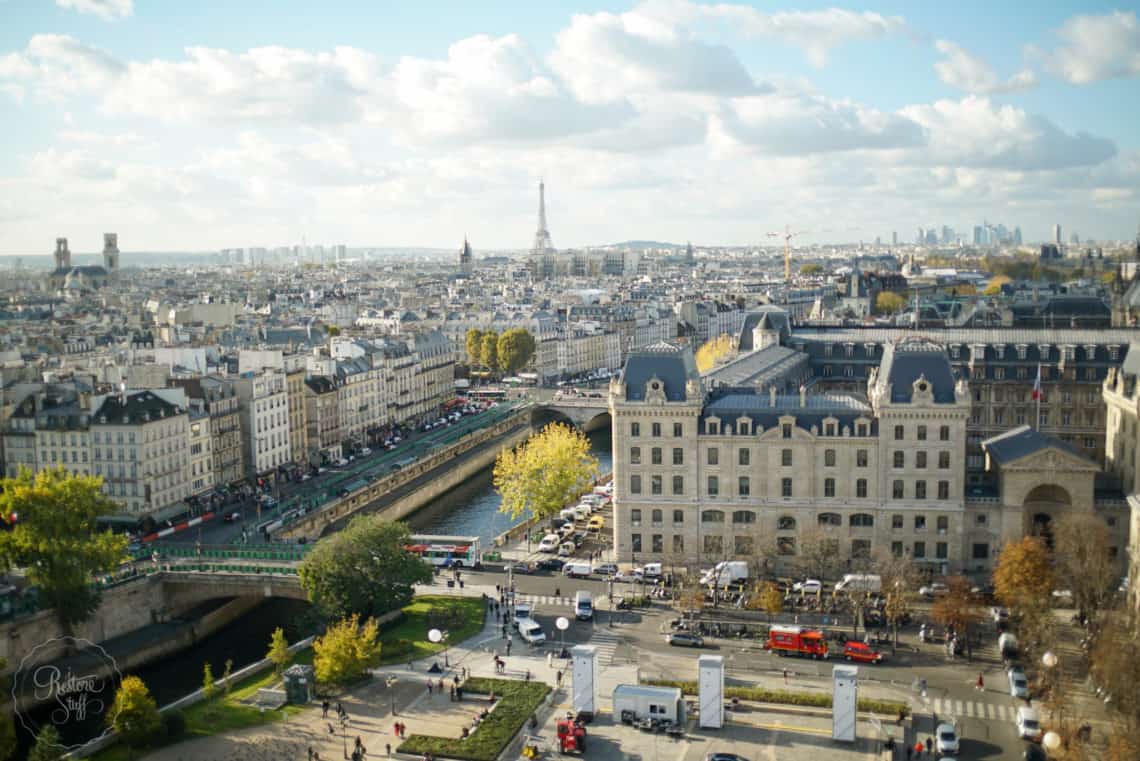 Check the size of the bells! And there’s not just one, either! 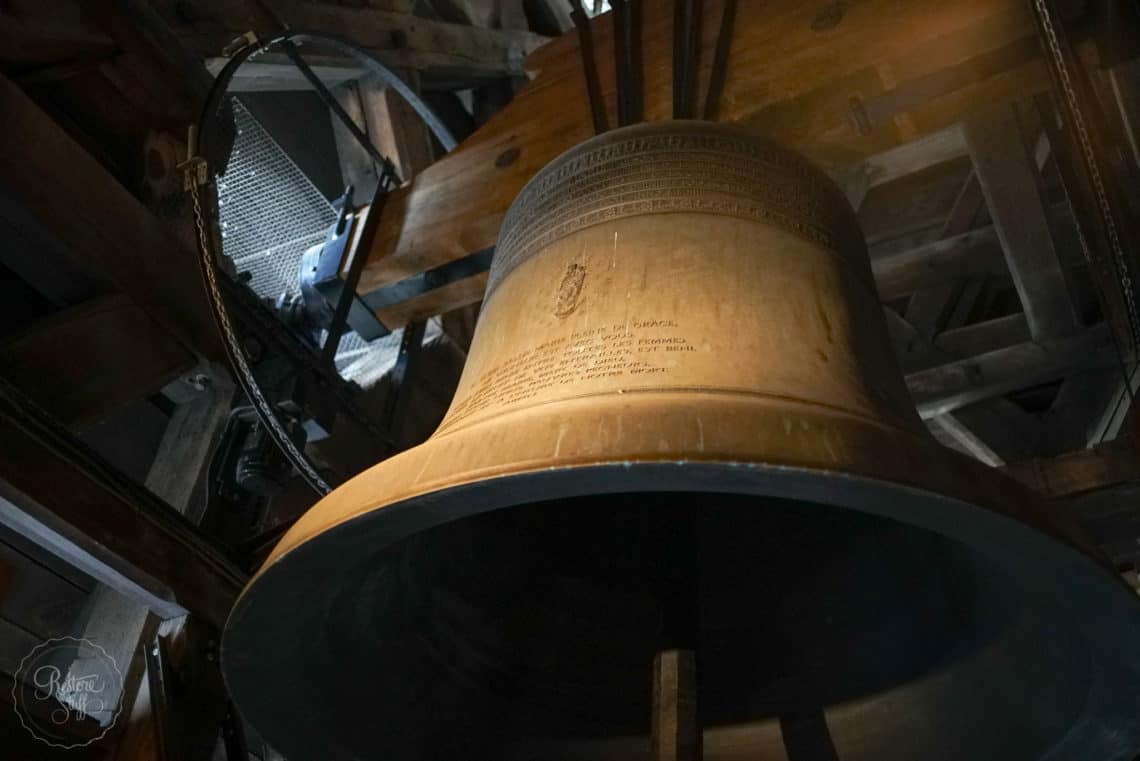 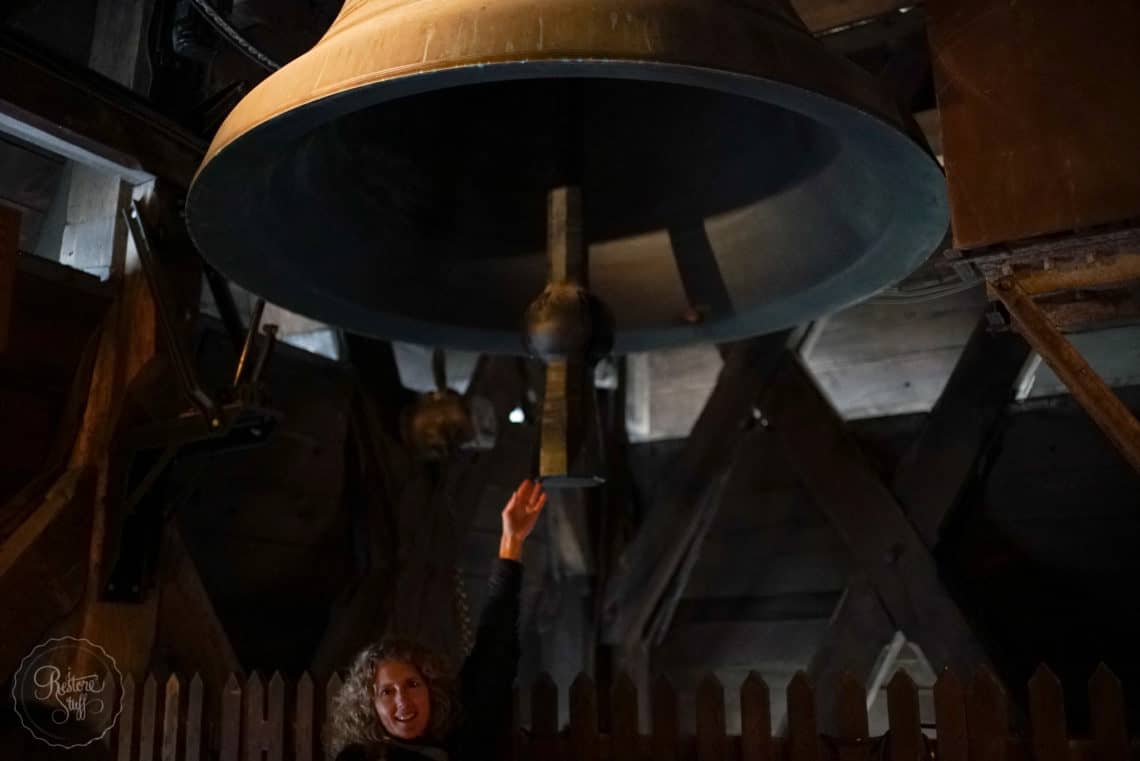 Haha – then in Notré Dame square, this film crew were shooting footage and interviewing tourists on why they came to visit Paris … so I obliged … and told them our romantic 25th year anniversary surprise story.

Yes, I was cold – and this is me in my only pair of covered shoes I had brought with me! LOL. 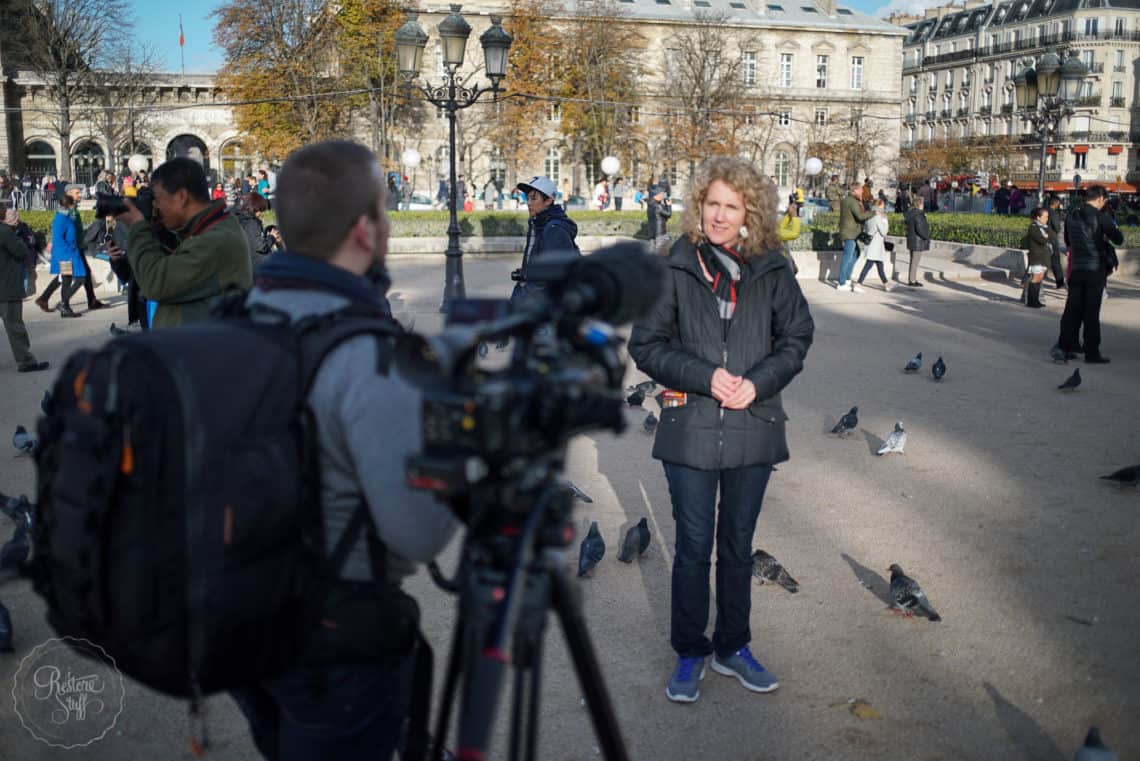 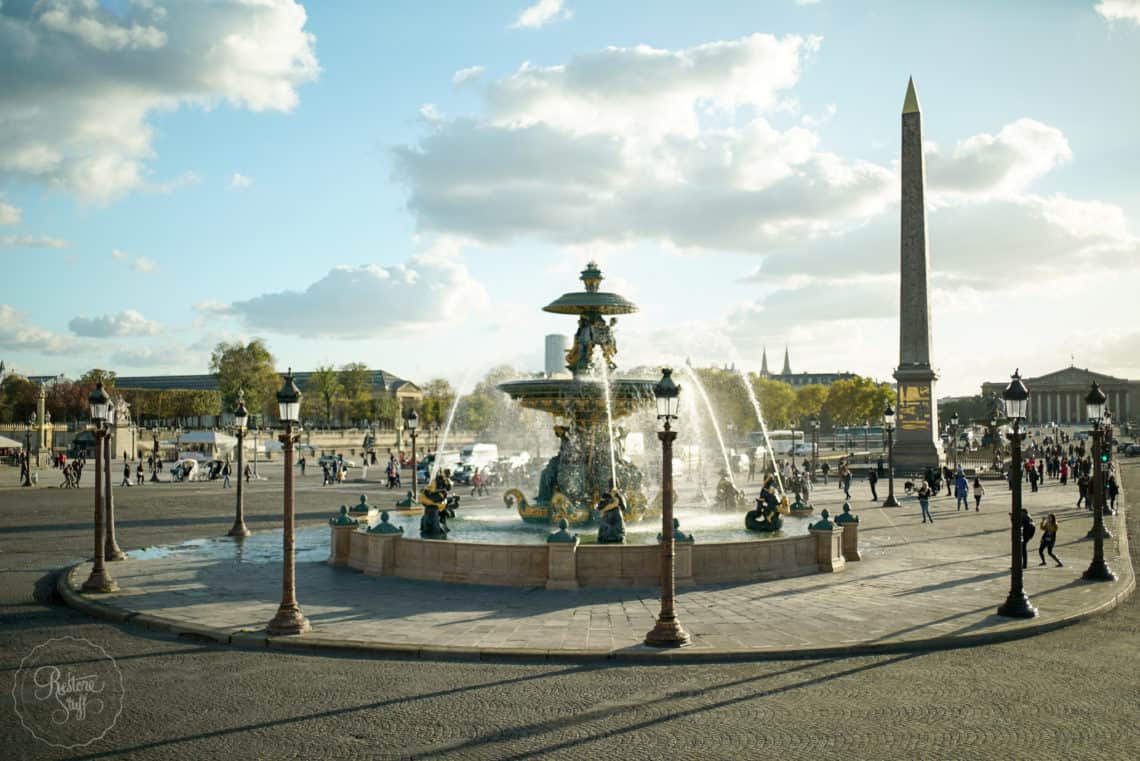 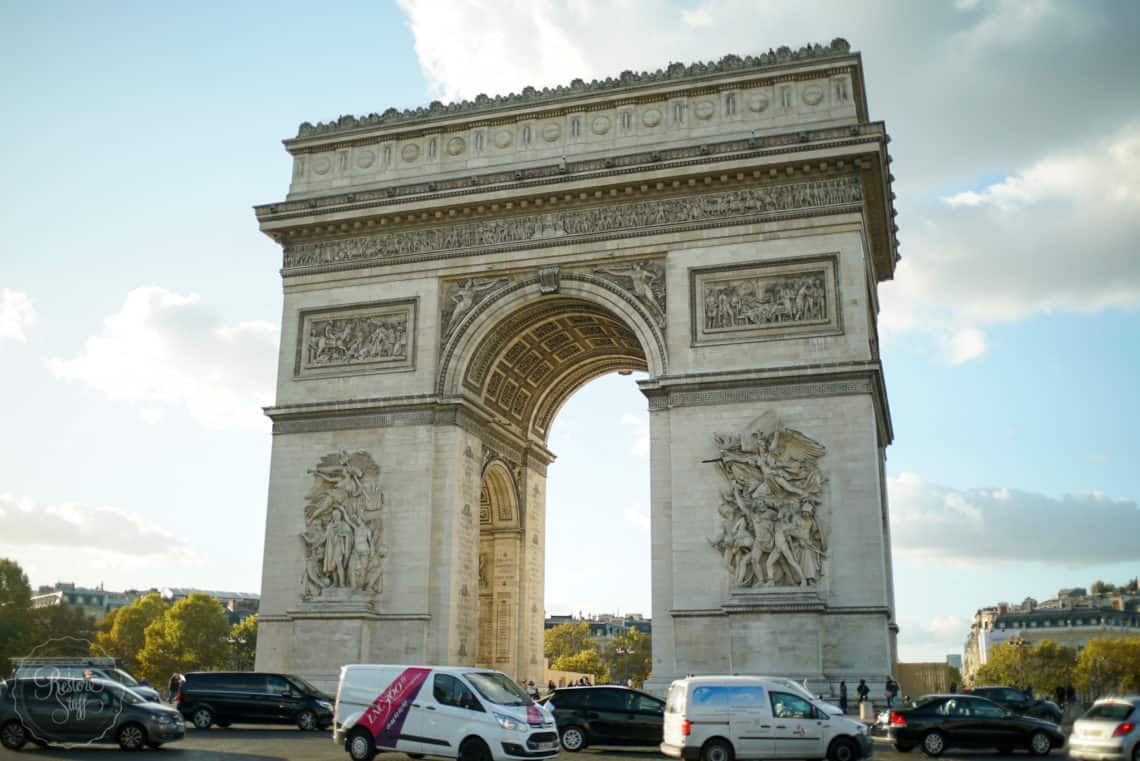 and then stopped to take a closer look and climb up to the top at night. 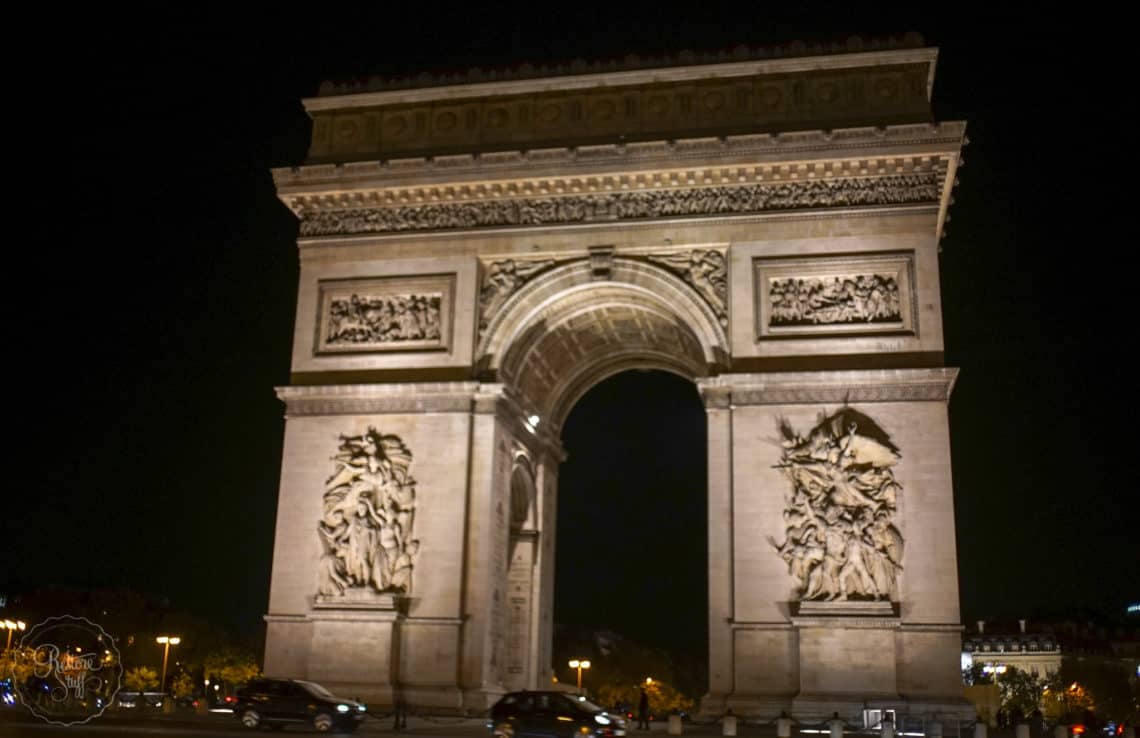 These spiral stairs. Feels like we’ve been climbing stairs all day. So glad we decided to take the lift up the Eiffel this morning, because we may not have made it up these by night time after the enormous amount of stairs climbed at Notré Dame too. 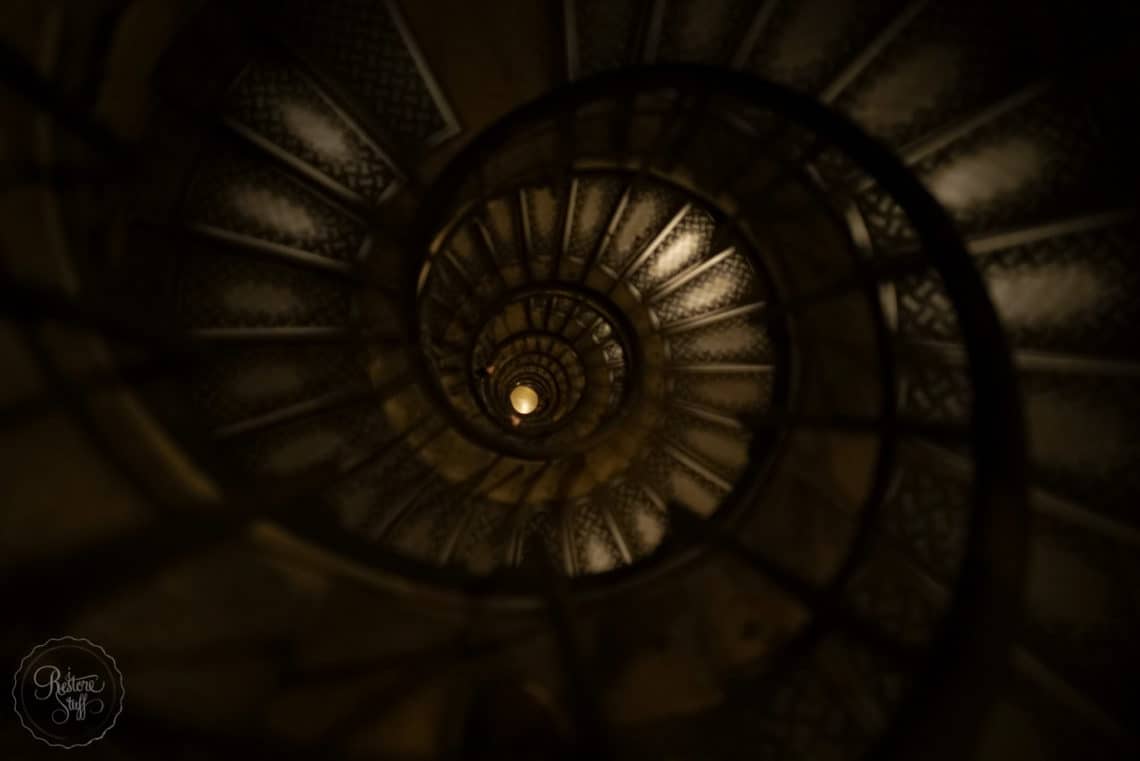 But the views from the top after sundown, were so pretty! 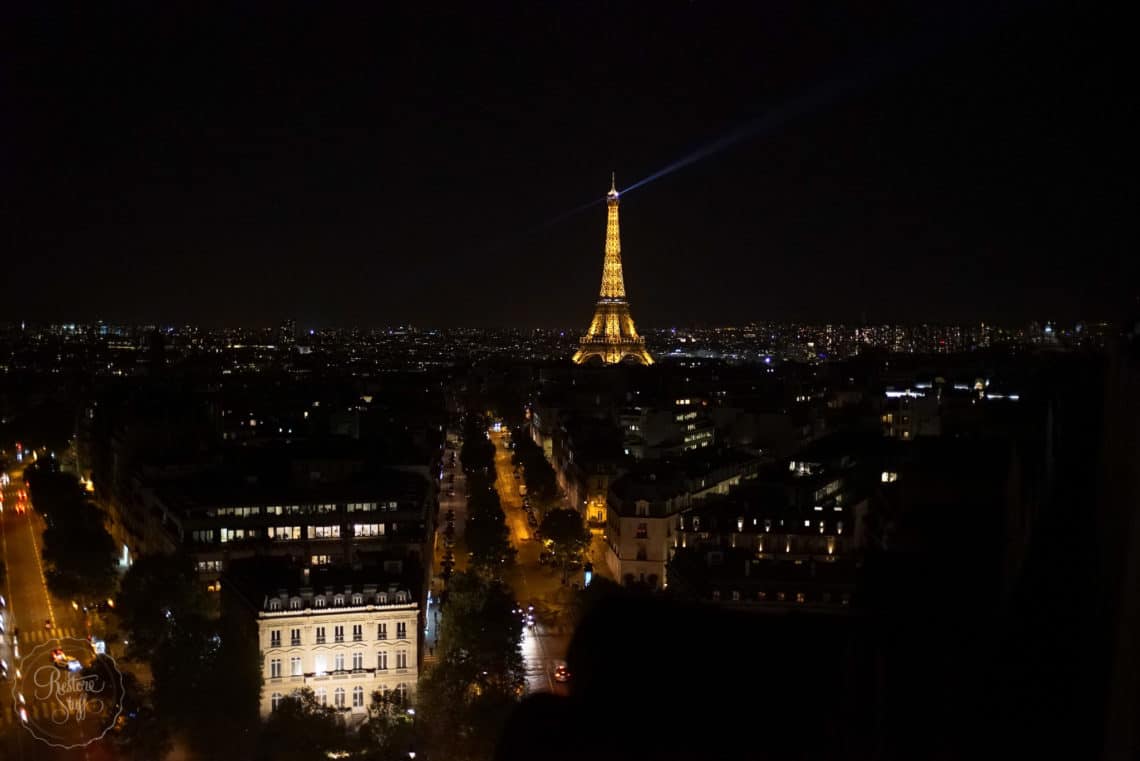 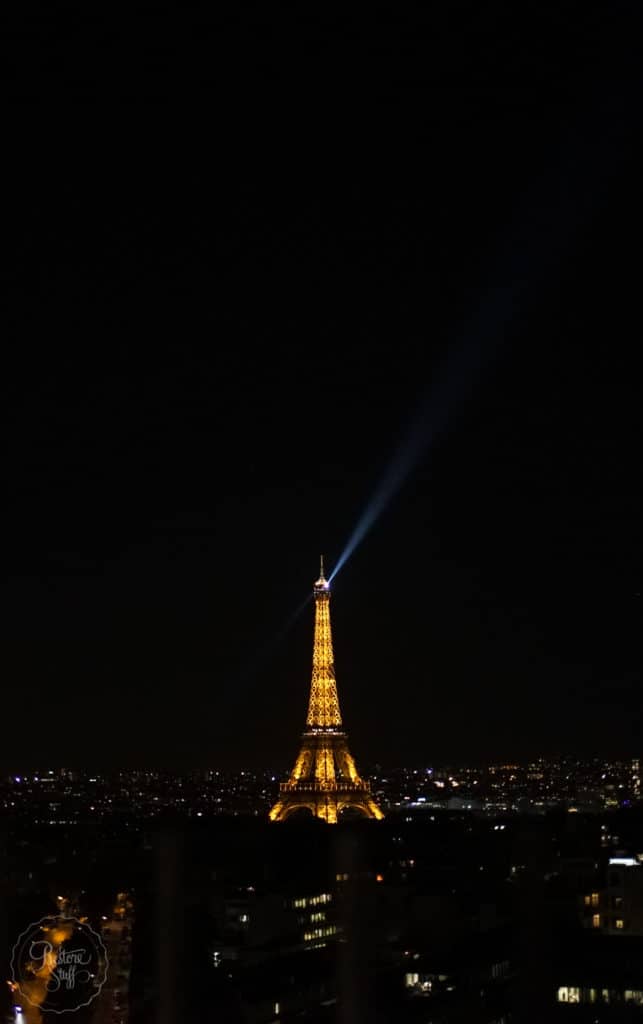 And so I begin and end this post, with two different views of the famous Eiffel Tower!

As I usually do, I’ll intersperse these posts among my regular DIY and Furniture painting tutorials. I hope you enjoyed some insight into our trip and if you get to Europe sometime soon, these are some places you may like to visit.

Meanwhile here in Australia, in DIY news, we are pretty excited that the new SFO (Stain & Finishing Oils) that have landed!

I can’t wait to show you some more projects I’ll be using these on, but for now, take a peek at this video by Jennylyn to see how lovely they are. Aussies can order them from my website now HERE. 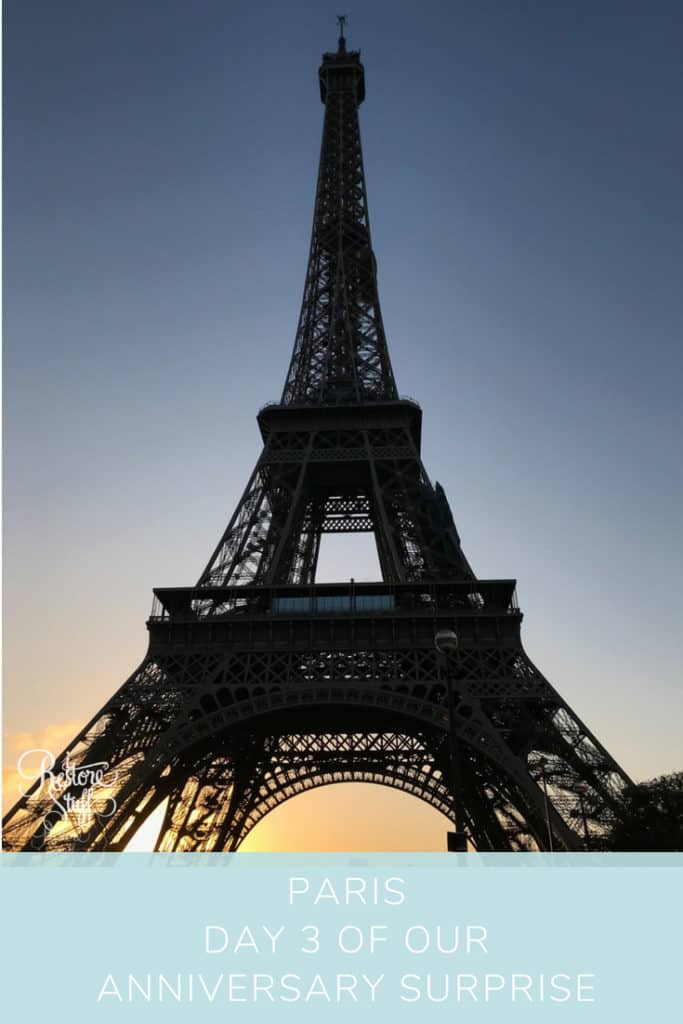 Previous Post: « Learn when you may need Fusion’s Ultra Grip before painting.
Next Post: 5 Tips to Help Your Cling On & Staalmeester Brushes Last Longer. »

This site uses Akismet to reduce spam. Learn how your comment data is processed.

GOOD NEWS: A small shipment of emergency stock has

Did you know that every month Miss Mustard Seed's

Have a browse here through my upstairs booth at @c